Approximately GST Rate for the PPE Kits is 5%, there is 18 percent GST Rates on sanitizers and 5 percent on face masks.

Goods and Services Tax in India is taxed at four separate rates NIL, 5%, 12% and 18% on medicines and medical supplies. NIL rate is charged on blood and its by-products, and all contraceptives.

The lowest GST rate of 5 % is charged on life-saving drugs like vaccines and medicines like those for tuberculosis, AIDS, diabetes, malaria among others.

The highest GST at the rate of 18% is charged only on the medicines, like nicotine gums, which contain nicotine polacrilex.

Although GST is charged at the rate of 28% on some other products and services under GST but the rate is not charged on any medicines or medical supplies. 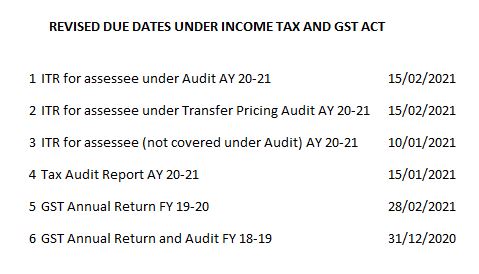 CBDT has notified that the total ITR filed till 21st December 2020 is 3.75 crores

The Central Board of Direct Taxes has notified that the total Income Tax Returns filed till 21st December 2020 for AY 2020-21, is 3.75 crores. Read the ITR-Wise break-up of the figure below:
Read More

Reserve Bank of India’s present governor Shaktikanta Das called for a press conference on May 22 to announce some major steps to revive the falling economy.
Read More

Government to Clear Pending Refunds for IT Department

The authorities will immediately release the refund for up to Rs 5 Lakh, and some 14 Lakh taxpayers will get the benefit after the release of pending refunds.
Read More

Quick Review of the Economic Package of 20 Lakh Crore

The date for Income Tax Return Filing has been extended to November 30, 2020, The finance minister said.
Read More

Due to COVID-19 pandemic and challenges faced by taxpayers, Government has extended dates for GST filings.
Read More
1 2 Next »